Books by Gann and Willen

Slavery in the World 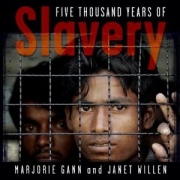 Five Thousand Years of Slavery tells the story of slaves from ancient times to the present day. You will read first-hand accounts by slaves, the courageous tales of abolitionists, and the sordid stories of slave owners. And you can find out what to do to help put an end to slavery in the world today. Want to learn more? Read below or peek into Five Thousand Years of Slavery by clicking here now.

Here are just some of the people you will read about:

The priests in the Lindisfarne monastery in England didn’t see the Vikings coming. But in 793, these fierce marauders traveled the North Sea in swift, sleek boats, determined to return home with great wealth. They stormed the monastery, attacking anyone who got in their way and making off with many of the church’s treasures, including priests, who became their slaves. A churchman wrote that the church “is now spattered with the blood of the priests of God.” The Vikings’ rampages across Europe continued for hundreds of years.

To find out more about Viking slavery, read chapter 3, “Saints and Vikings: Europe in the Middle Ages,” in Five Thousand Years of Slavery.

John R. Jewitt wanted adventure when he signed up as a blacksmith on a sailing ship. He got more than he bargained for when the ship anchored in Nootka Sound, near Vancouver Island. Jewitt was captured and became a slave of Maquina, a Nootka king, in 1803. Jewitt later wrote of the “terrific spectacle” when he saw six of Nootka’s men “standing in a circle around me, covered with the blood of my murdered comrades, with their daggers uplifted in their hands, prepared to strike. I now thought my last moment had come, and recommended my soul to my Maker.”

Instead, Maquina proposed to spare Jewitt’s life if he agreed to be his slave, fight for him in his battles, repair his muskets, and make daggers and knives for him. And so Jewitt and another surviving crew member joined with fifty others as Maquina’s slaves.

To learn what happened to John R. Jewitt, read chapter 6, “Explorers, Laborers, Warriors, Chiefs: The Americas,” in Five Thousand Years of Slavery. (Image B-01513 courtesy of Royal BC Museum, BC Archives.)

An Unusual Flight from Slavery

It wasn’t easy for American slaves to escape, but many tried. Some fled by night, following the North Star and helped along by the “conductors” on the Underground Railroad – a secret network of people, black and white, who hid slaves in wagons, barns, and lofts. But in 1851, a slave in Richmond, Virginia, named Henry Brown came up with a unique way to gain his freedom: turning himself into cargo!

With the help of a storekeeper, he shipped himself in a crate to Philadelphia, where a group of abolitionists was waiting for this delivery. He was tossed from wagon to baggage cart to steamer, sometimes upside down, but made the trip safely. To this day, he is known as Henry “Box” Brown!

To learn more about the abolition movement in the United States, read chapter 10, “Civil War, Civil Rights: The United States,” in Five Thousand Years of Slavery. (Photo courtesy of the Library of Congress.)

Sale of a Daughter

It’s hard to imagine that anyone would actually sell their child, but that’s what happened to the unhappy Chinese girl in this 1930 picture. Her parents sold her because they had no money to buy food. Slave girls were forced to clean, cook, and care for animals. Their food? Often just the scraps left after their owners had eaten. Their clothes? Rags.

To learn the story of one slave girl in China, read chapter 11, Blackbirders, Coolies, and Slave Girls: Asia and the Southern Pacific, in Five Thousand Years of Slavery. (Photo courtesy of Anti-Slavery International.

Abolitionists? They’re grown-up men and women, right? Not Craig Kielburger. At the age of twelve, he read a newspaper article about Iqbal Masih, a Pakistani boy his own age who had been enslaved since the age of four in a carpet factory. Iqbal escaped and became a powerful speaker, traveling the world to open people’s eyes to the problem of child slavery. But he was murdered, most likely to silence him. When Craig read Iqbal’s story, he decided to take action. He visited South Asia, where he learned about children like this one behind the fence, whose life is at risk in a fireworks factory. The campaign Craig began at home became Free the Children, a charity whose programs target the worst forms of child labor.

To learn the full story of Craig and Iqbal, read chapter 12, “Slavery Is Not History: The Modern World,” in Five Thousand Years of Slavery. (Photo courtesy of Free the Children, www.freethechildren.com.)

For information on how to order Five Thousand Years of Slavery in the United States, click here.

For information on how to order Five Thousand Years of Slavery in Canada, click here.